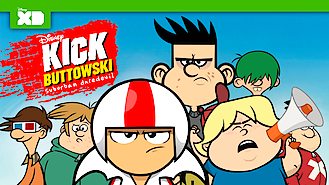 Not in Argentina but still want to watch Kick Buttowski: Suburban Daredevil?
No Problem!

Kick Buttowski may live in an ordinary town, but he's one extraordinary kid, who won't let size stop him from becoming the world's greatest daredevil. Sometimes big hearts come in small packages! This little guy with a cool name never shies away from a stunt.