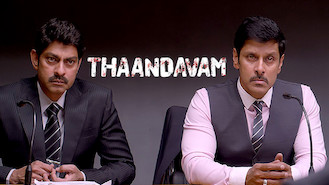 Not in Canada but still want to watch Thaandavam?
No Problem!

In London, a mysterious blind man named Kenny appears to be an assassin who uses echolocation to kill, but there is more to Kenny than meets the eye. A mysterious blind assassin out for revenge has the perfect cover. But when he falls in love, will his fortune change?