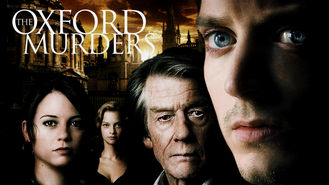 Not in Canada but still want to watch The Oxford Murders?
No Problem!

After an Oxford logic professor and his new graduate student discover a dead woman, they get involved in trying to solve a string of homicides. Can math solve murder? These two unlikely amateur investigators follow a tangled trail to find out.