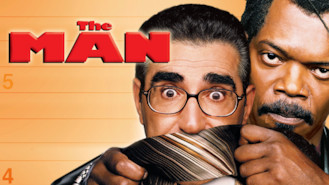 Not in Canada but still want to watch The Man?
No Problem!

A hard-nosed special agent seeks revenge on the man who killed his partner, but an identity mix-up forces him to work with a hapless salesman. A tough G-man works a case with a geeky dental supplier. But the Fed is on the verge of committing a crime of his own.