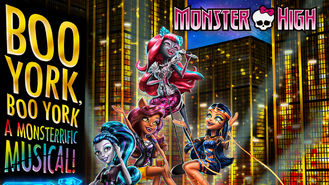 Not in Canada but still want to watch Monster High: Boo York, Boo York?
No Problem!

Cleo is invited to a gala in the big city celebrating a magical comet and brings her best friends along. But the sinister Nefera has other plans. A fancy party in the big city sounds like a ghoul's dream, but it could all be ruined by a rival's sinister scheme.