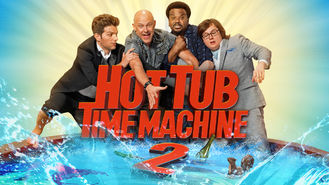 Not in Canada but still want to watch Hot Tub Time Machine 2?
No Problem!

Five years after their first adventure, Jacob and Nick try to go back in time to stop a man who shot Lou, but they wind up in the future instead. To catch a killer, the boys must travel into the past again. So why do they end up hot-tubbing into the future?