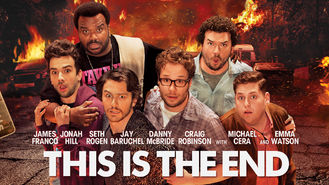 Not in Canada but still want to watch This Is the End?
No Problem!

This Is the End

Playing themselves in this witty black comedy, Seth Rogen and a bevy of Hollywood notables are stuck together at a party when the apocalypse dawns. Rude, narcissistic and just plain weird. It's the end of the world as they know it, and they feel Franco.