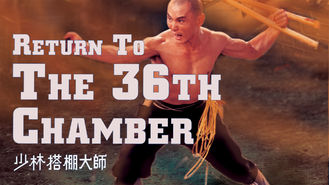 Not in Canada but still want to watch Return To The 36th Chamber?
No Problem!

Return To The 36th Chamber

When thugs prey upon innocent factory workers, a small-time scammer trains for revenge by studying the moves of Shaolin temple monks. Mastering kung fu in the secret 36th Chamber would take all of his courage. And quite a few of his con man tricks.