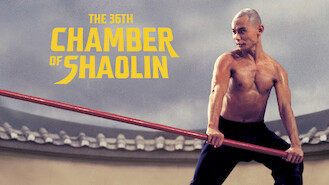 Not in Canada but still want to watch The 36th Chamber of Shaolin?
No Problem!

The 36th Chamber of Shaolin

After a corrupt general occupies his village and terrorizes his family, San Te vows revenge and leaves home to study the ancient fighting arts. He's been trained in the ancient arts of hands and weapons. But a fed-up monk dares to propose a radical new idea.