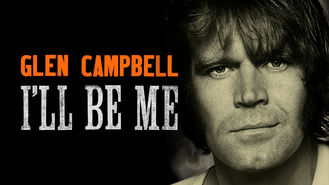 Not in Canada but still want to watch Glen Campbell: I'll Be Me?
No Problem!

Glen Campbell: I'll Be Me

This poignant film chronicles the country music icon's remarkable career, his 2011 Alzheimer's diagnosis, final tour and and his farewell to fans. An American musical icon gives the world an inside glimpse of his goodbye tour and his personal struggle.