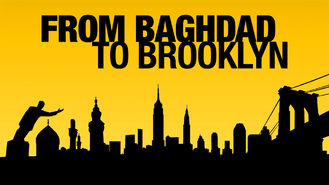 Not in Canada but still want to watch From Baghdad to Brooklyn?
No Problem!

From Baghdad to Brooklyn

Friendships are tested and illusions are shattered as an American journalist fights to bring a charismatic Iraqi refugee back to the United States. A refugee caught in limbo. An American bent on giving him a new life. The journey is harder than they ever imagined.