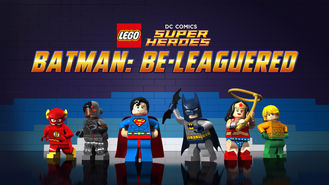 Not in Canada but still want to watch Lego DC Comics: Batman Be-Leaguered?
No Problem!

When Superman and the other Justice League superheroes start disappearing, it's up to Batman to unravel the caper and save the day. He likes to fight crime solo. But when his friends go missing, it could be time for this lone wolf to be a team player.