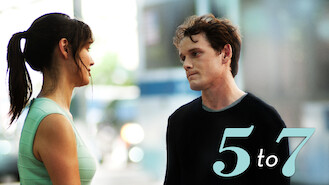 Not in Canada but still want to watch 5 to 7?
No Problem!

A young novelist's life is turned upside down when a chance encounter outside a New York hotel leads to an intense affair with a diplomat's wife. He's an idealist, with conservative beliefs about love and marriage. At least he used to be, until he met her.