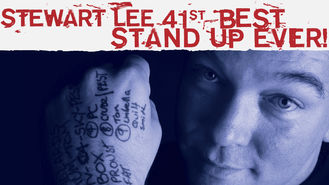 Not in Canada but still want to watch Stewart Lee: 41st Best Stand Up Ever?
No Problem!

Inspired by his ranking on a TV countdown, a wry Lee riffs on the absurdities of fame, from reality TV wars to a gig he performed in an insect suit. He's not even No. 1 on his mother's comedy list. A mischievous look at pop culture from the middle of the pack.