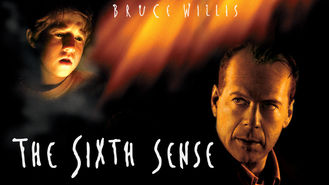 Not in Canada but still want to watch The Sixth Sense?
No Problem!

When a 6-year-old boy inexplicably starts seeing dead people, he lands in the care of a child psychologist who's determined to uncover the truth. A terrified child who sees ghosts shows his psychologist that nothing is what it seems. Including life itself.