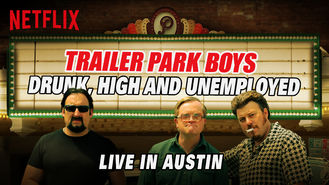 Not in Canada but still want to watch Trailer Park Boys: Live in Austin?
No Problem!

Ricky, Julian and Bubbles bring their trailer park humor out onto the stage for a night of bravado, schemes and an intoxicated acting demo. You thought the boys would actually sober up? Not until after they change the world.