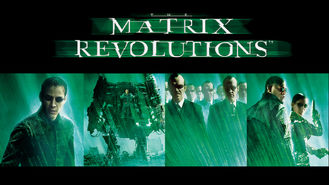 Not in Canada but still want to watch The Matrix Revolutions?
No Problem!

The final installment in the Matrix trilogy finds an unconscious Neo trapped in a subway station in a zone between the Matrix and the machine world. With Neo stuck in limbo, it's the hero who needs saving this time. Machines vs. humans, round three.