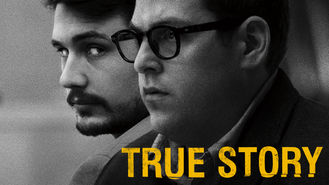 Not in Canada but still want to watch True Story?
No Problem!

This fact-based thriller follows the complex relationship between a disgraced New York Times reporter and the accused killer who usurped his identity. A journalist whose reputation is ruined. A killer who stole his identity. A bond too strange to be true. Except it is.