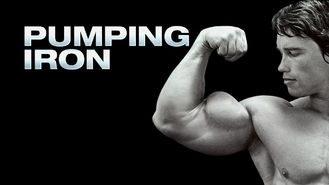 Not in Canada but still want to watch Pumping Iron?
No Problem!

Starring five-time Mr. Olympia winner Arnold Schwarzenegger, this film follows the then 28-year-old's progress as he competes for his sixth title. Bulked-up modern gladiators vie for a major body-building title. Can the reigning king hold onto his crown?