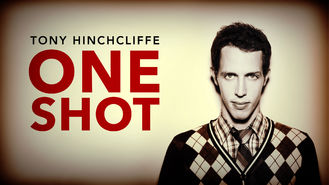 Not in Canada but still want to watch Tony Hinchcliffe: One Shot?
No Problem!

This groundbreaking comedy special is presented in one continuous shot of witty stand-up from the Ice House in Pasadena, California. He's a verbal assassin of comedy who fears nothing: no topic, no audience, not even the camera that never stops filming.