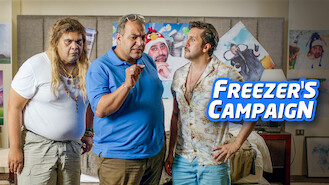 Not in Canada but still want to watch Freezer's Campaign?
No Problem!

When climate change makes Egypt freeze over, intelligence officers pose as a film crew on location to seek a device that can eliminate the frost. They’re secret agents, not actors. But their country's in a sudden Ice Age. Saving it will take some dramatic action.