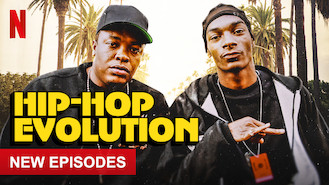 Not in Canada but still want to watch Hip-Hop Evolution?
No Problem!

Interviews with influential MCs, DJs and moguls trace the genre's dynamic evolution from the 1970s through the 1990s in this documentary series. Originators. Innovators. Revolutionaries. Hip-hop legends share the stories and sounds that changed the game.