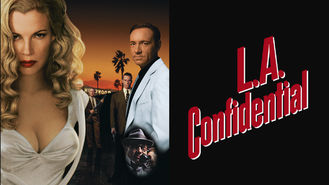 Not in Egypt but still want to watch L.A. Confidential?
No Problem!

Three wildly different cops form an uneasy alliance to ferret out police corruption in this Oscar-winning whodunit set in 1950s Los Angeles. It's 1950s L.A., where politics, Hollywood and cops collide. No one's off limits, and no one's secrets are "hush-hush."