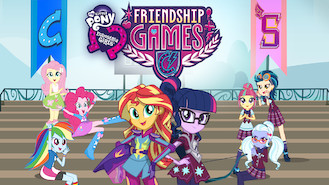 Not in Egypt but still want to watch My Little Pony Equestria Girls:...?
No Problem!

Rainbow Dash, Applejack and friends compete against Crystal Prep Academy and their lead athlete, this world's Twilight Sparkle, in sporting events. There's little time for horseplay when the girls engage in a friendly battle with a rival school. No magic allowed!