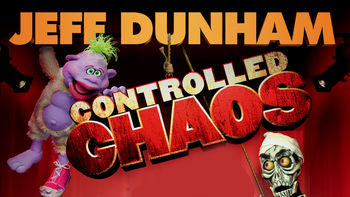 Not in Finland but still want to watch Jeff Dunham: Controlled Chaos?
No Problem!

Politically incorrect and often raunchy humor pepper ventriloquist Dunham's live concert performance featuring characters Walter, Achmed and Peanut. He's one comic, but this ventriloquist brings a whole lot of funny friends along. Of course, they sit on his lap.