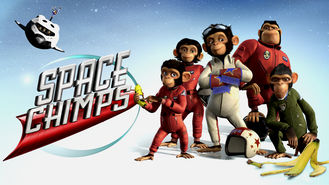 Not in Finland but still want to watch Space Chimps?
No Problem!

Playful chimp Ham III finds himself knee-deep in an intergalactic revolution when NASA drafts him to recover a missing probe in this animated comedy. A monkey takes a job as an astronaut. Now he's got to defeat an evil space guy. Can his circus tricks help him win?