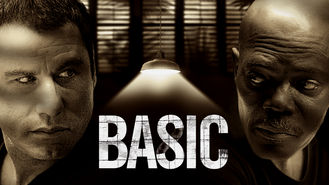 Not in Finland but still want to watch Basic?
No Problem!

Hardy and Osborne investigate the disappearance of a legendary Army Ranger drill sergeant and the deaths of four of his soldiers. A sadistic sergeant, the storm of the century and dead soldiers. This training is anything but basic.