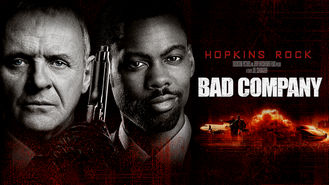 Not in Finland but still want to watch Bad Company?
No Problem!

A veteran CIA agent hooks up with a street-smart bookie, who's been asked to replace his murdered twin brother spy on a top-secret mission. A small-time hustler stands in for his dead twin brother in a CIA mission to nab a nuclear weapon. No pressure!