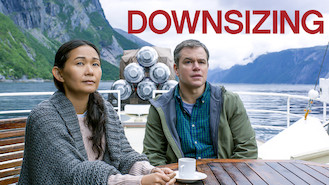 Not in Finland but still want to watch Downsizing?
No Problem!

Suburban couple Paul and Audrey decide to have themselves shrunk to tiny size and relocated to a miniature city where they can live in upscale luxury. He took a big chance by choosing to become small. He never imagined he would end up living so large.