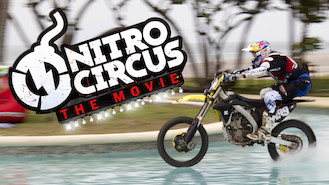 Not in France but still want to watch Nitro Circus: The Movie?
No Problem!

Enter the adrenaline-fueled world of freestyle motocross rider Travis Pastrana and his buddies as they travel the globe performing outrageous stunts. Flipping a big wheel over a 70-foot gap. Jumping out of a plane with no parachute. Are these guys insane?