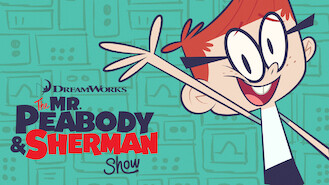 Not in Germany but still want to watch The Mr. Peabody and Sherman Show?
No Problem!

The Mr. Peabody and Sherman Show

Mr. Peabody and Sherman host a zany late-night comedy show from a swanky penthouse, with time-traveling historical figures and a live audience. Laughs, excitement, musical guests and time travel. It's all in a night's work for the world's smartest dog and his boy.