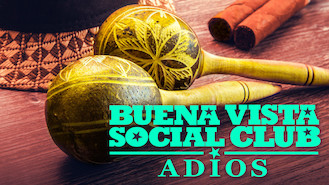 Not in India but still want to watch Buena Vista Social Club: Adios?
No Problem!

The remaining musicians from the influential album and tour look back on their lives, sounds and the ensemble's vital role in Cuban history. These once-forgotten songs moved the world -- and opened panoramic new vistas into Cuba's rich musical traditions.

Did you know you can access Netflix USA, Canada, Netherlands, Japan, and Germany from India or anywhere else worldwide? A few easy steps and you'll at least double your Netflix catalogue