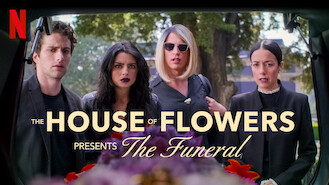 Not in Ireland but still want to watch The House of Flowers Presents: The Funeral?
No Problem!