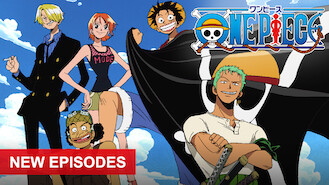 Not in Japan but still want to watch ONE PIECE?
No Problem!

Monkey D. Luffy sails with his crew of Straw Hat Pirates through the Grand Line to find the treasure One Piece and become the new king of the pirates. A pirate captain whose body is like rubber. A motley crew of adventurous pirates. It's treasure-hunting time.