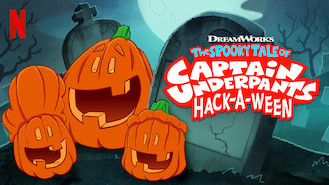 Not in Netherlands but still want to watch The Spooky Tale of Captain Underpants...?
No Problem!

The Spooky Tale of Captain Underpants...

When Melvin tries to cancel Halloween, clever best friends Harold and George create their own spooky holiday -- and it's a huge success! Halloween's been declared illegal. But fear not! Harold and George won't hand over this holiday without a fight.