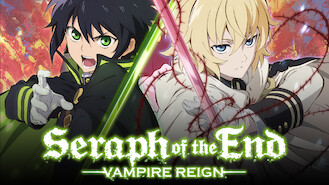 Not in Pakistan but still want to watch Seraph of the End?
No Problem!

Seraph of the End

After a deadly viral plague, the few child survivors become livestock for the vampires taking over the world. But one group is fighting back. He escaped captivity, but at great cost. He's now bent on destroying the vampires who enslaved and murdered his family.