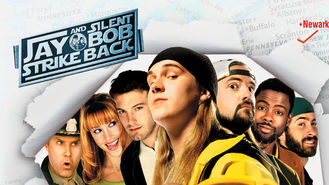 Not in Philippines but still want to watch Jay and Silent Bob Strike Back?
No Problem!

Jay and Silent Bob Strike Back

Jay and Silent Bob's comic book alter egos have been sold to Hollywood without permission, so they head to Tinseltown to sabotage the production. Going Hollywood? Hell no. The foul-mouthed stoner and his silent pal head to L.A. to stop a movie based on them.