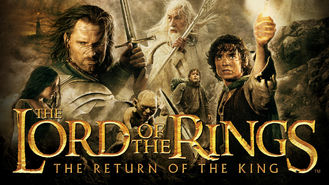 Not in Philippines but still want to watch Lord of the Rings: The Return of the King?
No Problem!

Lord of the Rings: The Return of the King

Aragorn is revealed as the heir to the ancient kings as he, Gandalf and the other members of the broken fellowship struggle to save Gondor. Two little hobbits risk life and limb to protect a powerful and dangerous ring. A fiery volcano awaits.