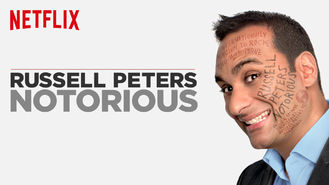 Not in Philippines but still want to watch Russell Peters: Notorious?
No Problem!

Global comedy star Russell Peters leaves no ethnic or cultural stereotype unsatirized in this outrageous standup appearance in Sydney, Australia. An Anglo-Indian comic with a unique perspective riffs on all things cultural and ethnic. Hilariously.