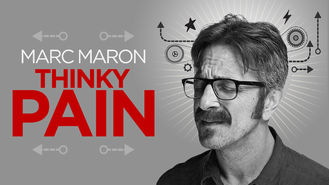 Not in Philippines but still want to watch Marc Maron: Thinky Pain?
No Problem!

Alternative comic Marc Maron is back on stage in New York to talk Chinese food, drug abuse, sex in hotel rooms and life with his girlfriend. Angry in life, the stage is where he feels most relaxed. Though you'd never know it from all the rage in his jokes.