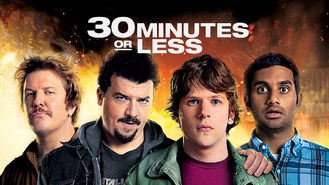 Not in Philippines but still want to watch 30 Minutes or Less?
No Problem!

Two crooks planning a bank heist wind up abducting a pizza delivery guy and force him to commit the robbery -- giving him a strict time limit to boot. A slacker pizza guy is forced to rob a bank. Dumb crooks, a bomb and really cold pizza ... there goes his tip.