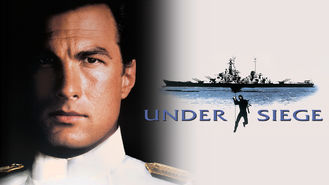 Not in Philippines but still want to watch Under Siege?
No Problem!

A disgruntled ex-CIA operative and his group of terrorists commandeer a soon-to-be-decommissioned battleship -- with nuclear blackmail in mind. A crazed CIA agent has a watertight plan to hijack a battleship. But he's tragically underestimated the resident cook.