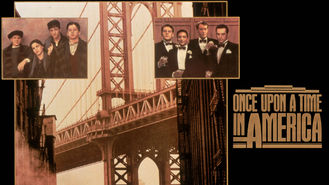 Not in Philippines but still want to watch Once Upon a Time in America?
No Problem!

Once Upon a Time in America

Director Sergio Leone's sprawling crime epic follows a group of Jewish mobsters who rise in the ranks of organized crime in 1920s New York City. Youthful delinquency sets off a lifetime of crime, ambition and betrayal for two childhood friends in old Brooklyn.