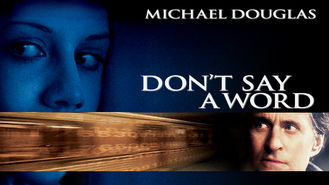 Not in Philippines but still want to watch Don't Say a Word?
No Problem!

A New York City shrink must extract the whereabouts of some hidden bank loot from the mind of a violent and catatonic mental patient. To save his kid, a frantic shrink needs fast info -- but it's locked in his demented patient's head. She'll never tell.