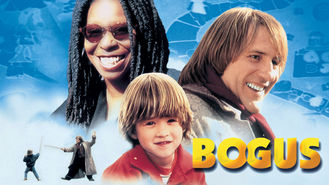 Not in Philippines but still want to watch Bogus?
No Problem!

When his mom dies in an accident, 7-year-old Albert moves in with his godmother but brings along his guardian angel, a bumbling magician named Bogus. A lonely boy is aching for a connection to replace the one he lost. Enter an imaginary friend with a French accent.