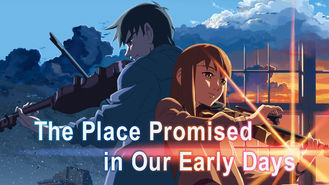 Not in Philippines but still want to watch The Place Promised in Our Early Days?
No Problem!

The Place Promised in Our Early Days

With Japan under two regimes following World War II, a group of friends aims to build a vessel to help them investigate a looming tower in Hokkaido. A giant, mysterious tower holds the secrets to the alternate universe of post-World War II Japan.