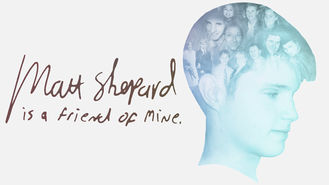 Not in Philippines but still want to watch Matt Shepard Is a Friend of Mine?
No Problem!

Matt Shepard Is a Friend of Mine

This documentary chronicles the life of Matthew Shepard, whose infamous 1998 murder left his friends and relatives devastated. His life was cut short in a brutal act of hate. His legacy galvanized a nation. But his friends and family still mourn.