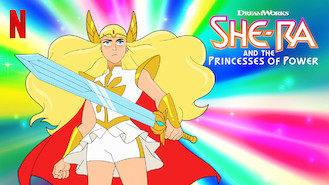 Not in South Korea but still want to watch She-Ra and the Princesses of Power?
No Problem!

She-Ra and the Princesses of Power

Soldier Adora finds a magic sword -- and her identity as legendary hero She-Ra. She joins the Rebellion, but her best friend stays with the evil Horde. A new hero rises on a war-torn planet and discovers her destiny. With help from her friends, she fights to restore balance to the world.