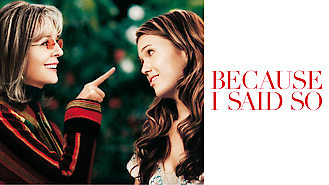 Not in Spain but still want to watch Because I Said So?
No Problem!

Because I Said So

In an effort to prevent family history from repeating itself, meddlesome mom Daphne sets up her youngest daughter with Mr. Right. Like any mom, she wants to give the best to her daughters. It's too bad her methods are so incredibly awkward.