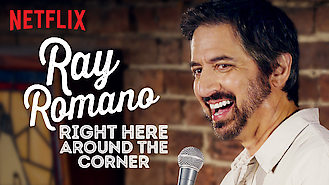 Not in Spain but still want to watch Ray Romano: Right Here, Around the Corner?
No Problem!

Ray Romano cut his stand-up teeth at the Comedy Cellar in New York. Now, in his first comedy special in 23 years, he returns to where it all began. He figured out stand-up. He figured out television. But when it comes to most everything else, he's still got no clue.